Get me outta here!

Just arrived for Diane’s Spun Singles class on Saturday the 6th Dec. Still spots left if you want to sign up!

This is what you can do with the singles when you’re done:

The photo is of Diane’s Morning Surf scarf…. purdy isn’t it?

Or you could just pop down to the shop on Wednesday evenings and I’d be happy to get you started! For basics tuition, there is a £10 fee to cover materials.

Poo. Poop. Have been waiting for ages for Twilight the movie based on Stephenie Meyer’s books to come out. Well, it was released this weekend in the US. UK doesn’t release it for another month! Argh. Well we’re on par with Vietnam, Venezuela, Israel and Brazil, and at least Ecuador is later even that the UK (March 09 release date). Italian Switzerland, Sweden, Mexico, Italy, Russia,

Hungary, Belgium, Latvia, Estonia, Czech Republic, UAE, even the Phillippines (!!!!!) release it next weekend. Sigh. I may just take myself to Brussels for the day and go watch it there.

Last night David & I went to watch Waltz with Bashir, an animated memoir about the director’s experiences serving in the Israeli army in the Lebanese war of 1982, and in particular about the massacre by Lebanon’s Christian Phalangist militia of Palestinian refugees in the refugee camps of Sabra and Chatila and the Israeli army’s involvement. I knew it was about the director’s experiences, and I knew it would be gritty. The film was…has a stunning echo, resonance, however you want to put it. When the credits started rolling, the silence in the theatre was so heavy. no one fidgeted or coughed. If someone had, it would of echoed like a boom in there. The film draws explicit parallels between the camps of the Holocaust & the culpability of the Nazi soldiers and their commanders on the one hand, and the Sabra/Shatila massacre and the Israeli soldiers, and in particular an accusing finger is pointed directly at Ariel Sharon (minister of defense at the time, aka by his diminutive Arik), on the other. As an aside, the Israeli government’s Kahan Commission investigated the massacres and found Sharon guilty for not having done enough to stop the horror once he became aware of the massacre. He was dismissed of his duties and prohibited from serving as Minister of Defense for another term. Still, he became Prime Minister of Israel twenty years later.

It’s harrowing and thought provoking. Searching, and unflinchingly honest. Which makes it all the more worth seeing. 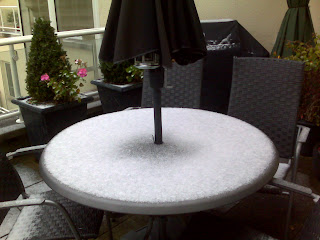 There has been a real nip in the air the past few days, and this morning we woke up to see white snow sprinkling the surfaces! I love snow despite how London handles it. it always makes me think of the huge snowbanks when I was little, and the amazing cave and snow slide my uncle dug out for me and my cousin when we were both little. Def the coolest thing ever.

And huge congratulations to Ed and Alison who had their little baby daughter yesterday. 11 pound wonderling, and in time to greet her first snowfall. Just magical!

Sometimes for a laugh I google myself to see if I come up in the results (the things that amuse me…). Searching just my name used to only confirm that there were loads of people out there with the same name, a large number of whom work in the medical field. I guess lots of parents with the same last name stopped at the A section of the baby name books.

Anyways, as David has been out at the rugby and I’ve been crazily test knitting the next club sock, for a break I searched me + London and discovered that I was first in the ranking, as well as number 5 on page 1. Wild. A search of just my name turns me up at the bottom of page 3 – with a mention from the Inside Loop (btw check out their new issue live now). Makes me realise really how small the world has really become.

What did we do before Google and Wikipedia?

Rainy and drizzly, today was a great day to be at the shop. Arianna & Edward dropped in with mini cupcakes and cinnamon rolls – there are some left overs which I am greedily going to keep for breakfast with coffee (hee yum yum!). The cupcakes were pumpkin spice & tart lemon – the tart lemon ones were totally moreish. The cake was moist and perfect, and the icing… oooh divine. Tart and lemony totally perfectly balanced with sweetness. Ahhhh.

Superspin 1 finished up their part 2 – and the evidence was there on the spinning wheels – lots of singles! Then we had a full house for the Sunday knit -Arianna, Edward, Tricia, Lucy, Mel, Emms, Marianne, Emilie (mommy’s little knitter), Gerri, Diane, and later on C & Carl too!!

Yes dear B- Sarah & Ruby are indeed your Sarah & Ruby! I hope they come back soon – I am itching to get Sarah knitting.

Oh exciting news (for me at least!) we had three visitors today from Sweden! I was able to offer them cake & coffee in Swedish. And they found Socktopus through Ravelry. Honestly Ravelry is the best thing since lattes and Bittersweet Bakers cupcakes.

Tomorrow I venture back to the City for a catch up with my JPMC colleague Melin – looking forward to that for sure. And then Alicja is coming to visit the shop tomorrow night.

I moved the furniture around in the shop (surprise surprise!). Looks cozier! More room for chairs. It was a good day for visiting – Arianna dropped by with some surprise cupcakes (all gone now, sorry – but ooo they were yummy!). Sarah popped in with baby Ruby (who was a perfect doll – slept like an angel!). Then Diane (with lunch – yummy and thank you!), then Ali, then Yuvee then Ruth! And finally a lovely lady at the end of the day searching for the BSJ. I am officially a destination! Yay!!

There was spinning, and knitting, and chatting and tea. Now off home to feed the little monkey who was being rather naughty today and had to be taken home at 5pm.

Oh and I found out that my anonymous poster was none other than my DH! Hee hee. Yes, I will find a special Socktopus kettle so we can return the other home. 🙂

So the little white tables are now my tea station (much easier than traipsing up and down the spiral stairs to get water). Can’t wait for the water cooler/heater thingie to be delivered.

And the 10 quid chairs! Some slip covers and bob’s your uncle! I think they will look so cute in a pale mint/cream striped fabric.

And my little table. So cute. Definitely well worn. I’ll get a replacement hinge for it this weekend.

Sometimes my gut is really spot on. I’ve been looking for a table and chairs and bits and pieces for the shop – and though i’ve been back to this one shop loads of times for the table and chairs, everytime I go something stops me from getting anything. Well tonight, as nora & diane were visiting, nora asked me whether my furniture had arrived. A big van full of things was stopped in front of the shop, and two young guys were unloading a couple armchairs. I popped out and asked them if they were getting rid of them, and they offered to sell them to me at a seriously steal of a price. I poked around a bit more in their van, like a little aladdin’s cave, and we came away with an old rickety desk (I love it – though it needs a little tlc to make it a bit more sturdy), 2 bedside table things, and 4 chairs, all for the princely sum of 160 squids. The chairs were only 10 quid each, and they were super comfy! I would have taken the sofa and armchairs but alas they wouldn’t fit in the shop. Am mighty pleased and not least because the tables I’ve been looking at have been rather expensive and nothing special. I’m glad I listened to my gut and didn’t buy the table and chairs I was lookign at as I am really fond of the table I got. Sometimes my instints do me proud. Oh and I might have convinced the movers to come and learn to knit. Score!

The weather has been just dismal the past couple days. Saturday it bucketed down – I’m used to baby rain – sort of misty rain that doesn’t quite merit an umbrella – but today and saturday it was just been… sloshing. Did the 3 minute walk from home to the shop and got drenched. This is weather for warm stews and soups. Soup noodles here i come!

So far so fun – I had a couple of parcels last week – yummy Louet Mooi (have to write up my mata hati pattern and knit another swallowtail… no wait, must finish my other one… no wait, must finish… well, many things first), Cariad Yarn (aka Posh Yarn – Emily, Laura, Lei and Miranda), and Oceanwind Knits is supposed to be shipped out from Canada tomorrow. Yay! And now I have been officially open for a whole week at the new shop. Finally found a table I like, now to get some chairs and cushions.. and where to put the christmas tree?

Tomorrow going to see the doctor, nothing serious just a blood test to check on my thryoid function (that is, if they will give me one. Maybe they won’t, i never know how it works with the GPs here).

This weekend was my goddaughter’s birthday party – she turned 3 last week. She’s a very active and self assured little girl. Such a sweet heart she was dressed as cinderella, though she was a bit disappointed not to have worn her matching cinderella undies. It was happy chaos – lots of little kids playing not quite with each other, but near enough, with Annalise the children’s entertainer leading songs and starting out with a dress up bag (ingenious!) and face painting. A little girl, very serious looking and cute like a little china doll had a small butterfly painted on her cheek – I think she was pleased but she kept a poker face to keep Annalise guessing. Arlo and Hilde were there – Hilde a totally self possessed grown up 7 year old, and Arlo the sweetest little pirate ever. Another pirate with a large foam sword was a bit scary – he was chasing Deuce around with the sword screaming, though with an imperious command from Sophia went running to the clear head honcho of the group! So fascinating, children’s interaction and political hierarchies. We had cupcakes in honour of the birthday girl and then pizza afterwards with the birthday parents. Caught up with Julie & Matt (Julie is the genius behind Tru Clos – an exclusive wine club with small producer French wines hand picked by this talented young wine expert), B’s childhood friend Will and his little girl Natalie, Lukola & of course B fresh from Japan and Paul fresh from Ohio.